selling point: It’s bread that’s almost entirely nuts or something like that?
qualities: sweet taste, refreshing, nutty so lots of good texture, lots of layers within the bread leads to an interesting textural eating experience (breaks apart in an interesting way). Reassuringly oily. Thick. Not a strong taste, again mildly sweet, definitely texture is its strength.
eaten with: avocado (sliced, not mashed) and then later also hummus
good for: hiking, breakfast,…?
not good for: Could be difficult to toast? Didn’t really try to toast because was afraid would crumble apart in the toaster? But that being said, not as crumbly as seed bread COULD be. I don’t think it really needs to be toasted, as a lot of this bread’s strength comes from it’s texture and cool/moistness, which might be lost if toasted. Remember, this bread already has a built-in crunch.
price: very expensive, 3.90 if I remember correctly. But very dense and filling, so you don’t really need more than one slice. Lasted several days.
packaging and presentation: Package is a calm tan + white with a clear folie strip (for looking at your bread in the supermarket, presumably). The packaging makes some pretty wild claims like “die neue Brotsensation!”. I don’t necessarily disagree, but what is this based on??

friendly review: “A marriage of opposites: crunchy yet moist”

overall rating: hard to say, really. I really like this bread, so I think if I were to start a rating scale right off the bat it could end up being a bit skewed because of how much I enjoyed this bread. So I think I’m going to hold off on the rating for now and maybe come back later when I’ve done some more sampling. 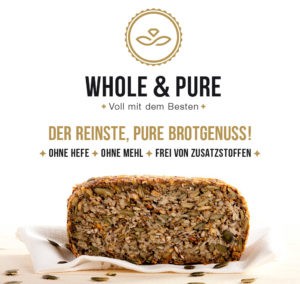 Classic revolutionary language being coopted and represented as marketing campaign. The “whole” individual self is not a revolution!! Drowning.