eaten with: avocado, later cheese, then with avocado again, then cheese again- several samples before the review

bad for: looking at. Stick to the eating. 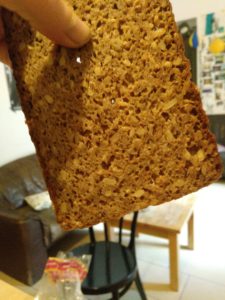 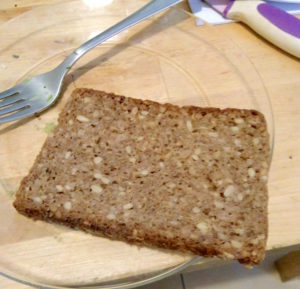 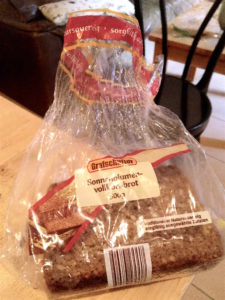 qualities: actually such a great toast bread!! Wide, flat, thin, overall just a great toast shape and texture. It really fries / crisps up when toasted, especially on the edges, which is really nice. I love a toast that’s a bit hard to chew; after enough toasting, this bread really delivers in that category. Although maybe that’s more a comment on the nature of toast.

Haven’t yet had the nerve to eat this bread untoasted; just based on appearance, I feel a bit freaked out by that possibility. It is a somewhat grey-ish brown color, not the most reassuring of appearances. Also oily.

In terms of taste, we’re talking sweet. The package claims a nutty taste but I deeply disagree with that evaluation.

Environment/packaging: Thin, milky clear plastic bag. Incidentally, the bread on the packaging looks absolutely nothing like the bread in the bag. Also not sure I understand the purpose of putting an image of bread on a bag that you can easily look through to see the actual, ~real~, bread? And then who chose this clownish red / tan/ orange color scheme? I guess if you are selling a bread for 69 cents maybe you’re not putting that much effort into appearances.

The package also claims “Carefully chosen ingredients” which is a bit frustrating because I was just starting to really like this bread, and then they came out with this obvious lie, and now I’m skeptical of the entire bread project. Also, how much selection goes into bread ingredients? It seems there are like a few things you always have to throw in to make bread be bread, so selection might not play too much of a role there. It seems like they just really wanted to have something positive to put on the package. Just wish they had gone in another direction with that.

Overall rating: 6.25 out of 10. Really impressed with the toast quality to price ratio. Not convinced by taste but it’s unobtrusive enough to not be a huge factor. All in all, a great bread for those cheap-toast weeks.